The dance between phones in my office never stops, partly because there is always something new to test, but also because I’m never satisfied and always find something off-putting about every phone I use for more than a few days. That’s why you have likely seen the posts we do where we mention that this Samsung or that Pixel is the one we keep coming back to, even with all of the other supposedly-better phones available. This is another one of those posts and it’s about the OnePlus 10 Pro.

Since finishing my review of the OnePlus 10 Pro a full month ago, it’s probably been the phone that’s seen my SIM card the most. I’ve danced between the Pixel 6 Pro (on Android 12 Beta builds), my iPhone 13 Pro (because I like MagSafe), and the regular Pixel 6 (Android 13!), but something keeps pulling me back to OnePlus’ newest high-end phone.

I know that I said in my review that the phone was a pleasure to use, yet there were concerns. I was put off by weird software quirks baked into ColorOS – I’m sorry, “OxygenOS.” I wanted more specs, because who doesn’t want a full 12GB RAM and 256GB storage that will never be put to use? The lack of wide carrier support was a bad look. Even the price made me question whether or not this phone was an option next to the Pixel 6 Pro at the same price.

The other thing that became obvious while writing my review and during my testing was the fact that I kept talking about how much I like the OnePlus 10 Pro. This phone is really good, simply from a usability perspective. In other words, it’s just great to hold, scroll with, look at, and touch.

OnePlus may just make phones that OPPO didn’t find a use for these days, but they are still excellent. The haptics on this phone might be my favorite of any in recent years, up there with the Pixel 6 Pro. The display, while it does have slightly curved edges, is basically flat and awesome. The phone itself has a good weight to it, without all of the curved obnoxious nonsense that other phones have. It’s a perfectly balanced phone, at least in my hand. I’ll never complain about a phone with this texture and the lack of fingerprints either.

The software has all of the goods I need, like an excellent always-on display, smoothness for days, levels to the dark mode, a vertical scrolling launcher (this is a shot at Samsung), and several other areas I can customize. I like that there is an extra set of options for the lock screen or home screen or statusbar that you won’t find from Google, yet there isn’t an overwhelming amount of bloat like you find in Samsung’s One UI.

The camera is quite solid as well and borderline excellent, in my opinion. No, it isn’t a low-light champion like the Pixel 6 Pro, but your boy isn’t at the club taking pics on weekends. My photoshoots come outdoors on hikes or at the park or at a soccer match or sitting outside on a patio at a brewery. In all of these situations, I find it great. This is a camera I can trust and that’s important. 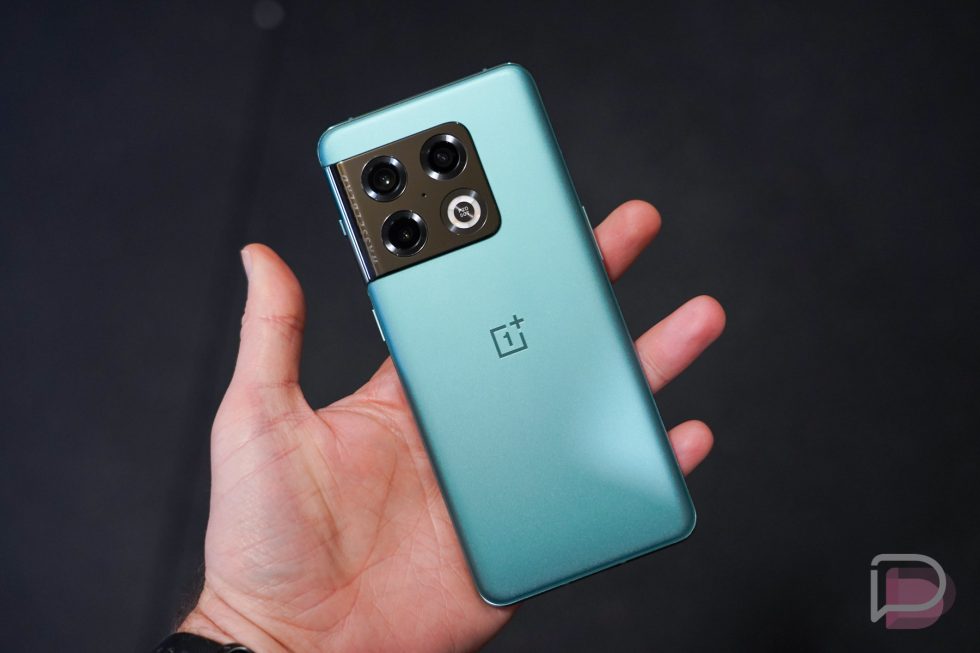 Of course, not all is perfect with the OnePlus 10 Pro. There are still annoying software issues with lock screen notifications, interactions with notifications, and that this feels like Android 11 and not Android 12. The update situation will be worse than it is on Google or Samsung phones – there’s no getting around that.

But again, just speaking purely from a daily usage perspective, this phone is excellent in many ways. And trust me, I keep looking for reasons to switch to another phone because that’s how my brain functions after doing this for 12 years. I’ve switched and switched and switched in recent weeks. This phone keeps winning me over, though.

So does that mean you should buy one at $899 and with only 8GB RAM and 128GB storage? Oooooooh, that remains a tough call. For most people, I’d probably tell you to consider holding off a bit to see if the rumors of a true OnePlus flagship later this year are accurate. This phone is great, and I think you’d all enjoy it, but if there’s more in the not-too-distant-future, it may be worth holding off. Either that or wait to see if a 12GB-256GB model does show up here for under $1,000.