We’ve seen a lot of custom clocks here at Hackaday, many of which have pushed the traditional definition of the timepiece to its absolute limit. But for all their wild designs, most of them do have something in common: they assume you can actually read a clock and understand the concept of time. But what if you’re developing a clock for a toddler who’s only just coming to terms with such heady ideas?

The answer, at least for [Riley Parish] is a set of 3D printed eyes that are illuminated with either yellow or green LEDs depending on whether or not it’s time to get out of bed. More than just the color of the light, the eye design (which is embedded into the rear of the front panel) switches between wide-open and tightly shut depending on the time of day. 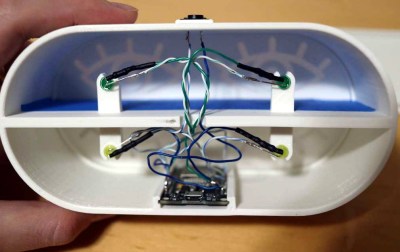 Internally the device is very simple, with the 5 mm LEDs and their associated resistors connected directly to the digital out pins on an ESP32 development board. While the dual-core microcontroller is admittedly pretty overkill for flipping some LEDs every 12 hours or so, the firmware does at least pull the current time from NTP — plus the powerful MCU offers plenty of room to grow. A web front-end to configure the device or check its current status would only be a few more lines of code.

As it so happens, this isn’t the first toddler timepiece to grace these pages. Perhaps unsurprisingly, those previous examples also used changing color to help indicate the passage of time.