Don’t Believe Everything You Read: The Great Electric Toaster Hoax

We’ve all looked up things on Wikipedia and, generally, it is usually correct information. However, the fact that anyone can edit it leads to abuse and makes it somewhat unreliable. Case in point? The BBC’s [Marco Silva] has the story of the great online toaster hoax which erroneously identified the inventor of the toaster with great impact.

You should read the original story, but in case you want a synopsis, here goes: Until recently, the Wikipedia entry for toasters stated that a Scottish man named Alan MacMasters invented the electric toaster in the 1800s. Sounds plausible. Even more so because several books had picked it up along with the Scottish government’s Brand Scottland website. At least one school had a day memorializing the inventor and a TV show also honored him with a special dessert named for Alan MacMasters, the supposed inventor. 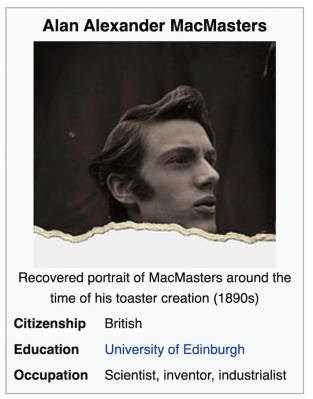 And then if you looked up “Alan MacMasters”, you’d be lead to a page with his biography. The only problem is, he’s just a 30-year-old engineer who currently lives in London. We aren’t even sure if he owns a toaster.

It started in 2012 when a university lecturer warned about using Wikipedia as a source. He told the class that a friend of his had put his own name in as the inventor of the toaster. So the real Alan MacMasters and his friends decided they should correct it but then on a lark, decided to replace it with Alan’s name instead. The prank was forgotten until later when the Daily Mirror listed MacMaster’s toaster invention. Alan then decided to create an entire article about “himself” in 2013. It included a poorly photoshopped picture of himself — the rip hiding his modern clothes. For a decade, the story spread along with some embellishments. It was apparently a bit of a meme.

Last year, a schoolboy from Kent noticed the picture looked fake and raised it in a Reddit group that discusses Wikipedia. A bit of investigation had the article deleted.

There’s an old science demonstration where you have people guess how many gumballs are in a jar. Individual guesses are usually off, sometimes wildly. But, somehow, the average will be eerily correct. But that assumes you have a big enough sample size to average.

Perhaps the takeaway, then, is that while Wikipedia isn’t always totally accurate, it is more likely to be accurate on things that get a lot of attention either because people are interested or there is a controversy. After all, when people noticed the Alan McMaster article, it did get resolved, and within 24 hours. But for a long time, no one was really looking at it.

If you get the start date of World War II or the age of a world leader, it is probably correct because people are paying attention. But the more obscure the information, the more probability that it hasn’t been looked over by enough people to be certain. The same probably applies to websites in general. While no one is perfect, you do tend to weigh information from known credible sources over information from some unknown quantity.

And Who Was It?

I’ve pointed out before that while everyone knows Ameilia Earheart, she didn’t actually make it around the globe. Who did? Jerrie Mach was the first woman to fly solo around the world in 1964. So who did invent the toaster? Toaster experts say it was American Frank Shailor who filed the patent in 1909 on behalf of General Electric. Not that it was anything we would recognize as a toaster.

One of the best parts of being alive today is that we live in a world where the information equivalent of thousands of libraries is accessible from our living rooms. The responsibility that comes with that is that we have to be critical consumers of information. Crowdsourcing might not be bad, but you have to be aware of how big the crowd is and who it consists of before you can assign validity to anything you read.

We think of false stories as being a modern thing, but not so! If you make your hoax have at least some believable element, it will go even further, although that’s hardly a requirement.