The people who hate Sam Bankman-Fried the most

AI is finally good at stuff, and that’s a problem
Apple will finally encrypt iCloud Backups as part of major security push
Transparent Metal (Hydroxide) without Mr. Scott
Microscopic Metal 3D Printing with Gels
Love AI, but Don’t Love It Too Much
Old Wear OS Trick Will Update Your Pixel Watch
Apple is reportedly working on a folding screen that won’t be an iPhone
How to use a VPN on a Mac
If you want an iPhone 14 Pro this Christmas, these are your best options

Books You Should Read: Why Buildings Fall Down

People with long commutes usually come up with tricks to stay focused and alert and avoid the dangerous tendency to zone out during the drive. One trick I used to use was keeping mental track of the various construction projects I’d pass by on my way to work, noticing which piers on a new highway overpass were nearing completion, or watching steelworkers put together the complex rebar endoskeletons of a new stretch of roadway.

One project I loved to watch back in the 80s was a new high-rise going in right next to the highway, which fascinated me because of the construction method. Rather than putting together a steel frame, laying out decking, and covering each floor with concrete, the workers seemed to be fabricating each floor at ground level and then jacking them up on the vertical steel columns. I was fascinated by this because every time I passed by the floors were in a different position, spreading out vertically as the building grew.

And then one day, it just wasn’t there anymore. Where there had been columns stretching nine stories into the city sky with concrete slabs lined up ready to be jacked up into their final positions, there was just an enormous hole in the ground with a ghastly gray cloud of concrete dust rising from it. It was April 23, 1987, and what was once going to be a luxury apartment building called L’Ambience Plaza in Bridgeport, Connecticut lay pancaked into the ground, entombing the bodies of 28 construction workers. 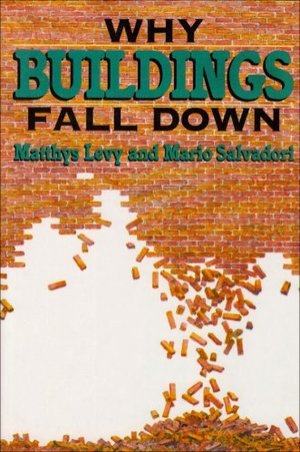 The collapse of L’Ambience Plaza is just one of the many case studies contained in “Why Buildings Fall Down,” a book that Matthys Levy and Mario Salvadori wrote in 1992. I stumbled upon the book not that long after it came out, and was instantly drawn to it because of my connection to the L’Ambience Plaza collapse; the job I was commuting to that day was actually as an emergency medical technician for an ambulance company in a neighboring city, so many of my friends were down in that hole trying to rescue construction workers as I was passing by, and I actually went to the scene later that day to volunteer my services. By the time I read this book I was already out of the EMS business and far more interested in the engineering aspects of what went wrong that day, and this book provided a detailed case study on L’Ambience Plaza that satisfied my curiosity about what happened that day, as well as more than a dozen other structural failures, most of which also resulted in at least some loss of life.

Each case study in the book is accompanied by simple but excellent diagrams by Kevin Woest that make it easy to understand the root cause of each failure. For L’Ambience Plaza, the threaded jack rods were found to pass through slots in the steel lifting frames rather than holes, which would have prevented them from slipping out and starting the progressive collapse that took the building down. The diagrams make this quite clear, and it’s easy to see why the mechanism was built the way it was; feeding a 1-1/4″ threaded rod through a hole is much harder to accomplish on a job site than slipping the lifting nut into a slot. But it’s also easy to see how that nut could slip out of the slot and cause a lot of trouble in the process.

Corrosion and metal fatigue are also well-represented in the book, from the multiple Comet airliner crashes at the beginning of the jet age thanks to stress concentration at the corners of the plane’s square windows to the 1980 collapse of the Mianus River bridge in Connecticut — my home state comes off rather badly in the book, with a total of three failures featured — thanks in part to rust accumulation in the hanger assembly of the suspended span bridge. There’s also a section devoted to the special problems that result from dealing with Mother Nature, including the Scoharie Creek bridge collapse on the New York Thruway in 1987 — it wasn’t a good decade for structural engineers — thanks to scouring of material from under the bridge’s piers thanks to the creek’s flood waters. And what book on structural failures would be complete without a discussion of “Galloping Gertie,” the famously flexible suspension bridge over the Tacoma Narrows that underwent rapid unplanned disassembly shortly after it opened in 1940 thanks to wind and resonance?

Not every structural failure in the book has classical engineering roots, though. Sometimes there’s a social engineering aspect to it, as was the case with the 1980 Hyatt Regency skywalk collapse in Kansas City, which was the single worst structural failure in US history in terms of lives lost prior to 9/11. That collapse, which killed 114 people and wounded over 200 more, involved a set of suspended walkways through an atrium connecting two blocks of the plush hotel, which were suspended from the ceiling by stout threaded rods. The problem was that the original design proved difficult to fabricate on the construction site, so the contractor suggested a change to the design. Unfortunately, the original engineer signed off on the change without really thinking it through; the resulting change in how the loads from the walkways were distributed eventually tore the structure apart. That one is particularly frightening to me; how many other engineers have rubber-stamped a seemingly innocuous change without running at least some calculations?

You Don’t Know Until You Know

I think what comes to mind with all these failures is just how close to the edge structural engineering can cut sometimes, especially when trying to make something innovative and beautiful. Throw enough steel and concrete at a structure and chances are pretty good you’ll get something that can stand the test of time. But if you’re trying to push the envelope and build something light and airy rather than brutally utilitarian, the engineering problem gets a bit tougher. Finding the right places to put structural members to carry the intended loads without interfering with the aesthetic design gets to be a bigger challenge, and sometimes the engineers just don’t get it right. And that’s a little scary, since we’re all constantly in, on, or near structures that may be pushing that structural envelope.

Of course, most structures stand the test of time, and catastrophic failures are few and far between. But there have been enough of them to make a book like “Why Buildings Fall Down” possible, and definitely worth reading if you’re interested in knowing what an engineer’s worst nightmare can be like. And for me, the book actually provided some closure to what I saw that day, and all the engineering questions that popped up in my mind because of it.

2022-11-24
Previous Post: Wednesday Poll: Do You Stick to One Brand or Switch It Up?
Next Post: How to Build Your Own Analog Phone Network